Named the “poet laureate of the wok” by food historian Betty Fussell, Grace Young has devoted her career to demystifying the ancient cooking utensil for use in contemporary kitchens. An award-winning cookbook author, culinary historian, and filmmaker, Grace has been a fierce advocate for Chinatown, never more so than in her video series Coronavirus: Chinatown Stories, —produced in collaboration with videographer Dan Ahn and Poster House museum—which documents the toll of the pandemic on New York City’s Chinese community. The series has been shown at the Smithsonian and was nominated for an IACP digital media award. In 2020 she partnered with the James Beard Foundation on an Instagram campaign to #savechineserestaurants. Building on that campaign she is now partnering with the James Beard Foundation and Poster House museum on the #LoveAAPI social media campaign to fight anti-Asian hate. In 2022, Grace has been recognized as Humanitarian of the Year by the James Beard Foundation for her work to save America’s Chinatowns amid AAPI hate during the pandemic.

Dubbed the “accidental voice for Chinatown” by Grub Street, Grace’s advocacy for Chinatown has been written about in Washington Post,  Smithsonian, Vogue, HuffingtonPost and Food & Wine magazine. She has partnered with Welcome to Chinatown for the Grace Young’s Support Chinatown Fund to raise over $40,000 to support Chinatown eateries and distribute food to the community. This ongoing campaign provides fresh, nutritious, and familiar meals for low income, food insecure, and at-risk senior residents in NYC. In April 2021 she partnered with Asian Americans For Equality (AAFE) for the Safe With Sound campaign, raising over $24,000 to provide personal security alarms for the AAPI community.

Grace’s accolades include the IACP 2021 Lifetime Achievement Award and Good Morning America’s Inspiration List for Who’s Making AAPI History in 2021. She received the James Beard Digital Award and Webby Award nomination for her video comedy Wok Therapist, a James Beard Award for her cookbook Stir-Frying to the Sky’s Edge and a James Beard nomination for The Breath of a Wok video. She has won six IACP awards including the 2019 Culinary Classics Award for The Breath of a Wok, (the “youngest” book to be inducted into the Cookbook Hall of Fame). The Breath of a Wok also won the Jane Grigson Award for distinguished scholarship. She is the author of The Wisdom of the Chinese Kitchen, winner of the IACP Best International Cookbook Award. Grace’s video, Chinese Trinidadian Chicken with Mango Chutney, won the 2017 IACP Digital Media Single Food-Focused Video Award. Grace is the recipient of the World Food Media Award, and the eGullet Culinary Journalist Scholarship. Stir-Frying to the Sky’s Edge was one of the top cookbooks of 2010 by NPR, The Washington Post, Good Morning America, and Huffington Post. In 2016, Grace was named one of the “40 for 40” Women honorees for the American Museum of Natural History’s Margaret Mead Film Festival.

Grace has devoted much of her career to preserving the traditional iron wok. With the growing popularity of nonstick cookware with Chinese and Chinese-American home cooks, the wok is an endangered culinary tool. She is the first food writer to write extensively about wok hei, the Cantonese term for a stir-fry that possesses wok fragrance and flavor. Grace’s translation of wok hei or the “breath of a wok” which she first coined in The Wisdom of the Chinese Kitchen, is now a part of Western culinary vocabulary. In 2004, Young was a guest curator for The Breath of a Wok exhibition at New York University’s Asian Pacific American Gallery. The show opened in 2005, at the Portland Classical Chinese Garden in Portland, OR.

Grace has been featured in The Washington Post , The New York Times, All Things Considered, and on CBS News Sunday Morning. In addition to appearing as a guest on Sara’s Weeknight Meals and the Martha Stewart Show, she has been on The Splendid Table, Brian Lehrer, All of It with Alison Stewart, The World, and Good Food with Evan Kleiman. For seventeen years Grace was the Test Kitchen Director and Director of Food Photography for over forty cookbooks published by Time-Life Books. Her work has appeared in The New York Times, The Washington Post, Cook’s Illustrated, America’s Test Kitchen, Food52, Gourmet, Epicurious, Serious Eats, Bon Appétit, TheKitchn, Chow, Food & Wine, Fine Cooking, Saveur, Gastronomica, Chicago Tribune, Boston Globe, Edible Communities, Everyday with Rachel Ray, and Better Homes and Garden.

Throughout Grace’s career healthy cooking has been a primary focus. She is featured in the WeightWatchers Stir-Fry Guru video series. Grace was the Test Kitchen Director for the U. C. Berkeley Wellness Cooking School and has written for Eating Well, Cooking Light, Shape, Men’s Health, Women’s Health, Fitness and Health magazines.

Grace currently serves on the Smithsonian’s National Museum of American History’s Kitchen Cabinet, an advisory board made up of leaders in food scholarship and culinary history to help the museum shape and expand its research, collections, programs and exhibitions related to food and beverage history. From 2004 to 2010, she served on the James Beard Foundation’s Book Awards Committee. She was a contributing editor for Saveur magazine from 2006-2015.

Grace is the co-founder of Wok Wednesdays an online stir-fry-wok cooking group. She has taught healthy stir-frying in cooking schools and spas throughout the U.S., including her popular Craftsy The Art of Stir-Frying online class which has reached over 12,000 students.

This is my Story

I grew up in San Francisco surrounded, on the one hand, by the immigrant Chinese traditions of my family and relatives, and, on the other, by innovative American culture. My earliest memories of food are of the extraordinary meals my mother and father prepared for us (my brother and me) and of the efforts they made to ensure that we ate well. Their care was not only a matter of selecting the freshest ingredients, but also for the authenticity with which they replicated the traditional Cantonese dishes of their youth in China during the 1930s and forties. This connection to the cooking of old-world China coupled with the discovery of Julia Child on television (and her “exotic” dishes) shaped my lifelong affair with food and cooking. At the age of thirteen I began an apprenticeship with Josephine Araldo, a French cooking teacher. Those lessons initiated an exploration of other cuisines and led me, eventually, to my career in food.

I spent much of my early professional life as the test kitchen director for over forty cookbooks published by Time Life Books. In the early nineties after growing weary of producing what had become soulless work with formulaic recipes, I developed a yearning to reconnect to the tastes and foods of my childhood. Over the next few years I made numerous trips back to San Francisco from my home in New York to cook with my 70-year old mother and 82-year old father. It took much cajoling and great persistence to convince them to teach me their recipes. At the beginning, my focus was on a precise recording of the recipes. Eventually, and to my great surprise, as we cooked my parents who had always been reticent about talking about the past began to share memories of their lives in China and accounts of their early days in America. This is how I came to learn a large part of my family’s history. What started as a little recipe project soon blossomed into a memoir cookbook, The Wisdom of the Chinese Kitchen, which was published by Simon and Schuster in 1999. The book was awarded the IACP Le Cordon Bleu Best International Cookbook Award, in addition to being a finalist for an IACP First Cookbook Award, and a finalist for the James Beard International Cookbook Award. It was also featured in a special segment on CBS Sunday Morning. Many of the relatives and friends who taught me their recipes and shared their stories have since passed away. The Wisdom of the Chinese Kitchen feels to me now almost like a treasured family album.

My second cookbook, The Breath of a Wok, grew out of the realization that most Chinese Americans know little about their own culinary traditions, specifically wok cooking. I had become aware also of how cooks in China were abandoning their classic, well-seasoned iron woks for inferior nonstick cookware. In a tribute to wok cookery and out of a desire to reignite its popularity, I partnered with Alan Richardson to create what the acclaimed food historian and author Betty Fussell described as, “a bridge between cultures for a Chinese-American in search of history and destiny. It is a remarkable collaboration between a writer and a photographer that reveals what the wok symbolizes—a craft, an art, a container of communal harmony and balance.” That book won the IACP Le Cordon Bleu Best International Cookbook Award, the Jane Grigson Award for Distinguished Scholarship, and the World Food Media Awards’ Best Food Book. It was also featured in the New York Times, on NPR’s All Things Considered and was selected as one of the best cookbooks of the year by Food & Wine, Fine Cooking, Bon Appetit, and Epicurious. 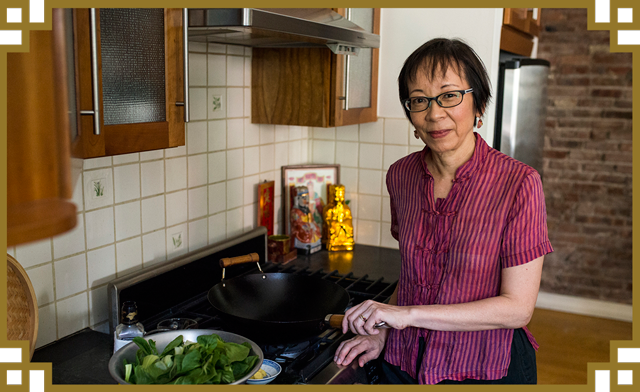 The Breath of a Wok led me to the adventure of traveling with my carbon-steel wok (in my hand-carry baggage) on a 25-city tour for the culinary retailer Sur la Table to teach the art of wok cooking. I published further articles on Chinese cooking in Gourmet, Bon Appetit, Eating Well, and Saveur, where I am a contributing editor. The book also brought me speaking engagements at the Culinary Institute at Greystone, China Institute, New York University Asian/Pacific/American Institute, the San Francisco Asian Art Museum, The French Culinary Institute, and the Chinese Historical Society of America.

In 2006 I began work on Stir-Frying to the Sky’s Edge. This effort was dedicated to the effort of empowering home cooks to stir-fry with confidence. It explores everything from the origins and health benefits of stir-frying to the technique’s great economy of time and fuel. I was awarded an IACP Culinary Trust eGullet Society for Culinary Arts & Letters Culinary Journalist Independent Study Scholarship which funded my research travel to Trinidad, Germany, Holland, Canada, and the United States to study the stir-fries of the Chinese diaspora. While Stir-Frying to the Sky’s Edge concentrates on traditional stir-fries, it is also filled with remarkable stories of how this simple, beloved cooking technique has enabled generations of Chinese around the world to eat well and with exquisite economy. My interviews include Chinese who grew up in such far-flung locations as Peru, Jamaica, Burma, Malaysia, Singapore, Taiwan, Vietnam, Macau, India, Indonesia, South Africa, and the Mississippi Delta.

My passion for recording and preserving Chinese culinary traditions continues to lead me in quest of home cooks who understand and enjoy the benefits Chinese cooking. If you have a comfort food that is at risk of being lost or a story to share, it would be my great delight to learn of them. Please feel free to contact me.

Photos Above: Mama, Grandmother, and me; Baba in China; Baba, Mama, my brother Douglas, and me on our first family trip to Hong Kong; Mama in China; Baba and me.