It was in late July, 2018, that I first heard about the best oyster sauce in the world—but I didn’t get to taste it until just recently. The news arrived in an Instagram post from Karen Shimizu, Executive Editor of Food & Wine. She’d posted a photo of a gold-colored bottle of oyster sauce labeled “Megachef” (a brand I’d never heard of) and written,“@melhansche thanks for turning me on to this stuff! Sooo good on stir-fried okra and scallions. And everything else.”

My curiosity was piqued, and I knew I had to taste the sauce when I scrolled down and found a comment from Andrea Nguyen: “That stuff is excellent but so hard to find!” And so began my quest. I headed down to Chinatown and searched every store, but no one carried it. One tiny market that stocks a lot of Southeast Asian products had Megachef fish sauce. I asked for the oyster sauce but the clerk looked at me blankly; she’d never heard of it. I bought a bottle of the fish sauce (which turned out to be great), and before leaving the shop asked if the clerk could order it for me. She said she’d ask her boss and took down my phone number, but I never heard from her. When I returned the following week, she pointed to the note as she shrugged her shoulders, “I asked for you…” The third time I stopped by she said they’d order it for me if I bought a case, but what would I do with a case? Oyster sauce is used in small quantities. It couldn’t possibly be good enough to justify ordering a case.

Back at my desk I Googled “Megachef oyster sauce,” and on the company’s website I found an enthusiastic endorsement from the chef and Thai food expert David Thompson. I also found a phone number for a U.S. distributor, but when I called, they couldn’t tell me where to buy the product in New York City. What?!?!? This was crazy. How could it be that Karen Shimizu bought Megachef oyster sauce in Birmingham, Alabama, but there was no retailer carrying it in New York City? I continued my search in Chinese supermarkets in Brooklyn and in Flushing, Queens, and even hunted for it in San Francisco’s Asian markets when I went home to see my family.

Lee Kum Kee Premium Oyster Sauce has been the gold standard for as long as anyone can remember. Company founder Lee Kum Sheung is said to have accidentally invented the sauce while cooking oysters way back in 1888. I have recommended the brand for years, but recently I’ve questioned its quality. When I was a child, oyster sauce figured in many of the traditional Cantonese dishes my parents cooked. It was drizzled onto steamed savory egg custard just before serving, it’s an essential ingredient for my favorite tomato-beef stir-fry, it seasons pan-fried tofu, and it’s a must when making the classic Cantonese oyster lo mein.

In recent years, I’ve made these dishes less frequently because there was something about the Lee Kum Kee sauce that didn’t match my flavor-memory of it. Had I romanticized the taste from my childhood, was it always so gloppy, or had the quality diminished in recent years? I checked the Megachef website and read that their sauce has no added color, MSG, or artificial flavors. Then I looked at the Lee Kum Kee label and saw that it contains MSG, modified cornstarch (as a thickener), and caramel color. In the end, it’s the taste that really matters, and the Megachef sauce is far superior to the Lee Kum Kee in both flavor and texture. 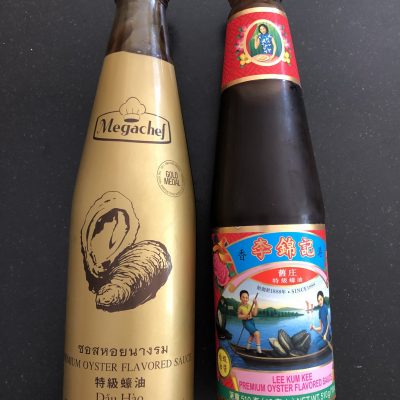 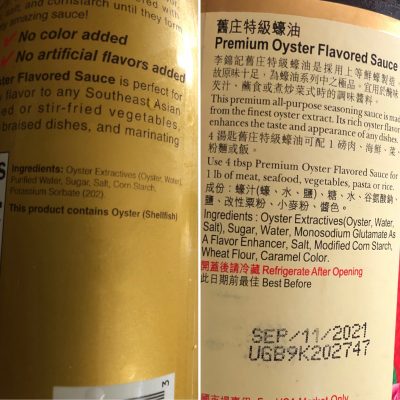 How did I finally find the Megachef Oyster Sauce? I happened to be emailing with Taylor Holliday, owner of The Mala Market, which is the best source for Sichuan ingredients in  the country. I think I asked Taylor if she was familiar with Megachef products and that’s when I found how she carries the Megachef oyster sauce!! It’s not cheap, though: A 21.2-ounce bottle costs $14 (plus shipping), versus about $5 for the 18-ounce Lee Kum Kee. But believe me, it’s worth every penny. The oyster flavor is the real deal, delicate and full of umami wonderfulness. The other brands I’ve tried, including my old standby, Lee Kum Kee, taste artificial by comparison. 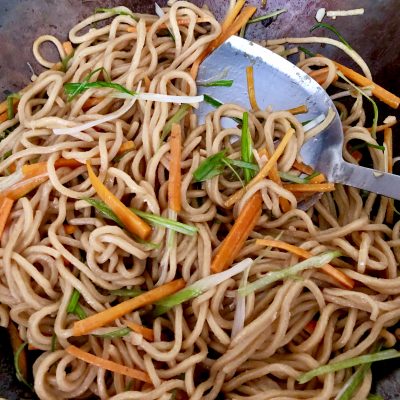 It’s been comforting to cook some of my favorite dishes from childhood and feel good about using oyster sauce again. I fired up the wok and stir-fried oyster lo mein, and sure enough, I savored the flavor of my childhood and was so grateful to finally taste the memory again.

I learned this recipe from Dickson Hee when I was writing The Breath of a Wok. At the time Dickson was the owner of Hong Hop Noodle Company in New York’s Chinatown. It was an old-time noodle shop that was started in 1910 by Dickson’s granduncle. Sadly it closed its doors several years ago.