Time is flying and I feel bad I’m so behind on posting what’s been happening. There’s been an enormous seismic shift in the Wok World that I should’ve reported a few weeks ago. If there’s nothing else I report for the rest of the year, I have to tell you there’s a wok revolution in the works! After years of recommending skillets rather than the wok for stir-frying, woks are arriving at America’s Test Kitchen for testing!

How do I know? Earlier this summer I received an invitation to visit America’s Test Kitchens in Boston. The request was to demonstrate the wok and discuss the essential concepts of wok cooking. It’s been almost a month since my visit and I’m still in shock. I was greeted by Lisa McManus the Executive Editor and Lan Lam, Senior Editor at Cook’s Illustrated. 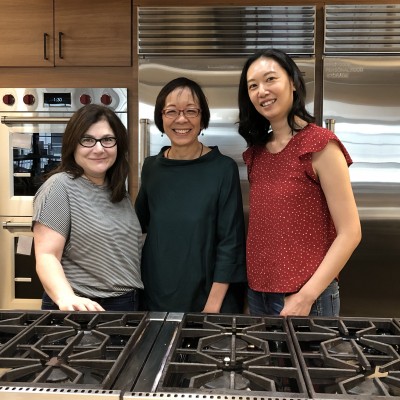 First thing was a tour of the amazing facility, located in the Seaport district of Boston. It’s a state-of-the-art 15,000 sq. ft. test kitchen, featuring 44 burners, 34 ovens, and more than enough elbow room for the 60+ test cooks and editors to test and tweak their recipes. Actually I lost count of how many test kitchens I passed. There are over 200 employees! 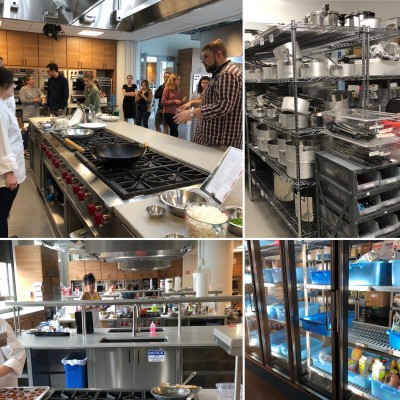 We passed various shoots happening in the photos kitchens and then I was brought into an enormous kitchen where Lisa, Lan and I could discuss woks.  Dan Souza the Editor-in-Chief of Cooks Illustrated stopped by and I did a little wok show and tell. Yes, thanks to my husband driving me up to Boston, I had brought a variety of woks from my collection in NYC that would never would have survived an airplane ride. I also had a selection of spatulas to discuss which ones work and which are not good for stir-frying.

It’s all a bit of a whir but before I know it I was being filmed for my wok demo. It’s normally intense being filmed but Lisa and Lan made it super easy for me. Everything had been precisely prepped for my demo. Actually it is better described as a wok off because I cooked two recipes in the wok and then Lisa cooked the same recipes in the skillet. This video that ATK posted on instagram captures the fun of the wok off! 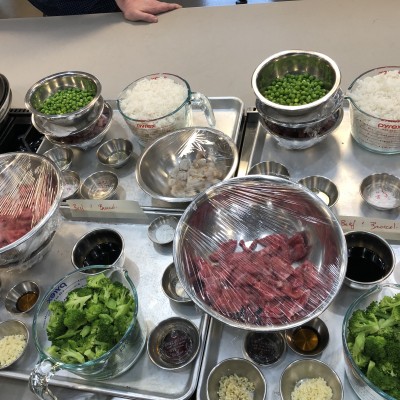 And finally there was a Q&A with some staff members that was hosted by Tucker Shaw, who is the Editor in Chief for Cook’s Country. We know each other because we both worked on the Beard Cookbook Committee for many years. That was fun to discuss how I got into the food world and the forces that have shaped my career. 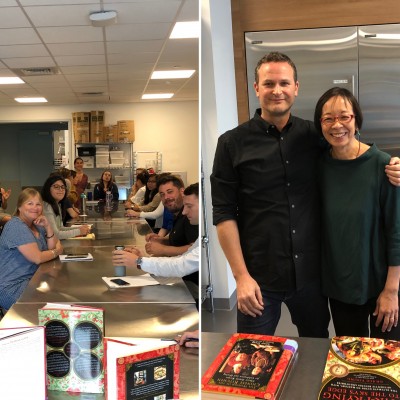 It was an amazing day. My beloved woks were showered with love and respect. It was a great experience and now I can’t wait to read the Cook’s Illustrated story that will come of all of this. It’s hard to believe that after rejecting the wok all of these years the tide is turning. And for the part of me that still is skeptical I was gratified to see Lisa McManus’ tweet a few days after I left: “I’m seasoning a bunch of woks today @Test Kitchen.” 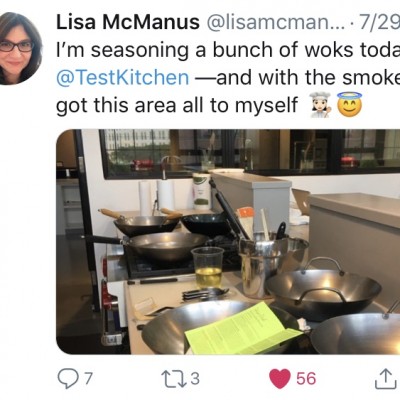 I almost forgot to mention the little gift I brought to America’s Test Kitchen. I thought they should have a traditional Kitchen God to protect the testers and editors from kitchen disasters and to make everything they cook extra delectable. Most important, wouldn’t it be nice for the Kitchen God to watch over the wok testing so that it’s unbelievably successful. Yup, I’m doing everything in my power to make sure the Wok Revolution is coming! Stay tuned! 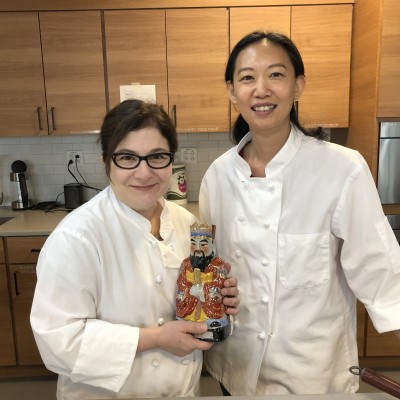 The feature image of me cooking was taken by Andrew Janjigian, Senior Editor at Cook’s Illustrated.