This month Wok Wednesdays is delighted to be offering a giveaway from The Mala Market. The winner will receive the Starter Mala Collection  (valued at $40) which includes premium red Sichuan peppers (da hong pao), dried whole facing-heaven chilies, fragrant-hot ground chilies, and chili bean paste made by the oldest and most esteemed maker in Pixian County in Sichuan. 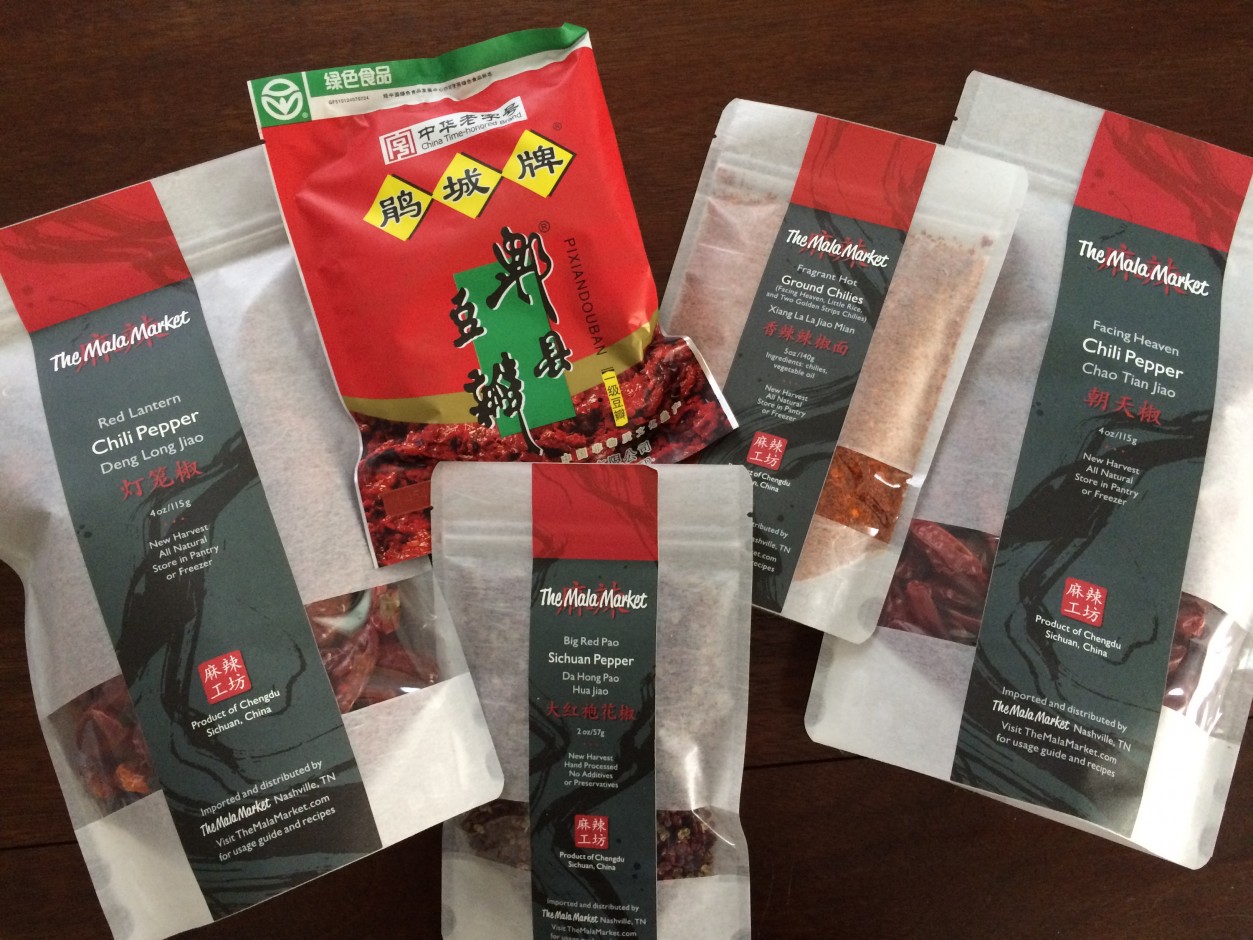 For years I’ve been frustrated by the inconsistent and mediocre quality of Sichuan peppercorns available in the United States. Because the American government requires that the peppercorns be heat-treated to kill any parasites the distinct flavor and aroma have been dramatically diminished. On occasion I’ve resorted to asking friends to bring back good quality Sichuan peppercorns from the Yuan Heng Spice Co. in Hong Kong. Recently I tried the Mala Market Sichuan peppercorns and the moment I opened the package I knew I was in for a treat. First of all the fragrance is unbelievable and the Dried Fried Pepper and Salt Shrimp and Vinegar Glazed Chicken  I cooked with the peppers were outstanding. Taylor Holliday the owner of The Mala Market was kind enough to explain why her peppercorns are so special. 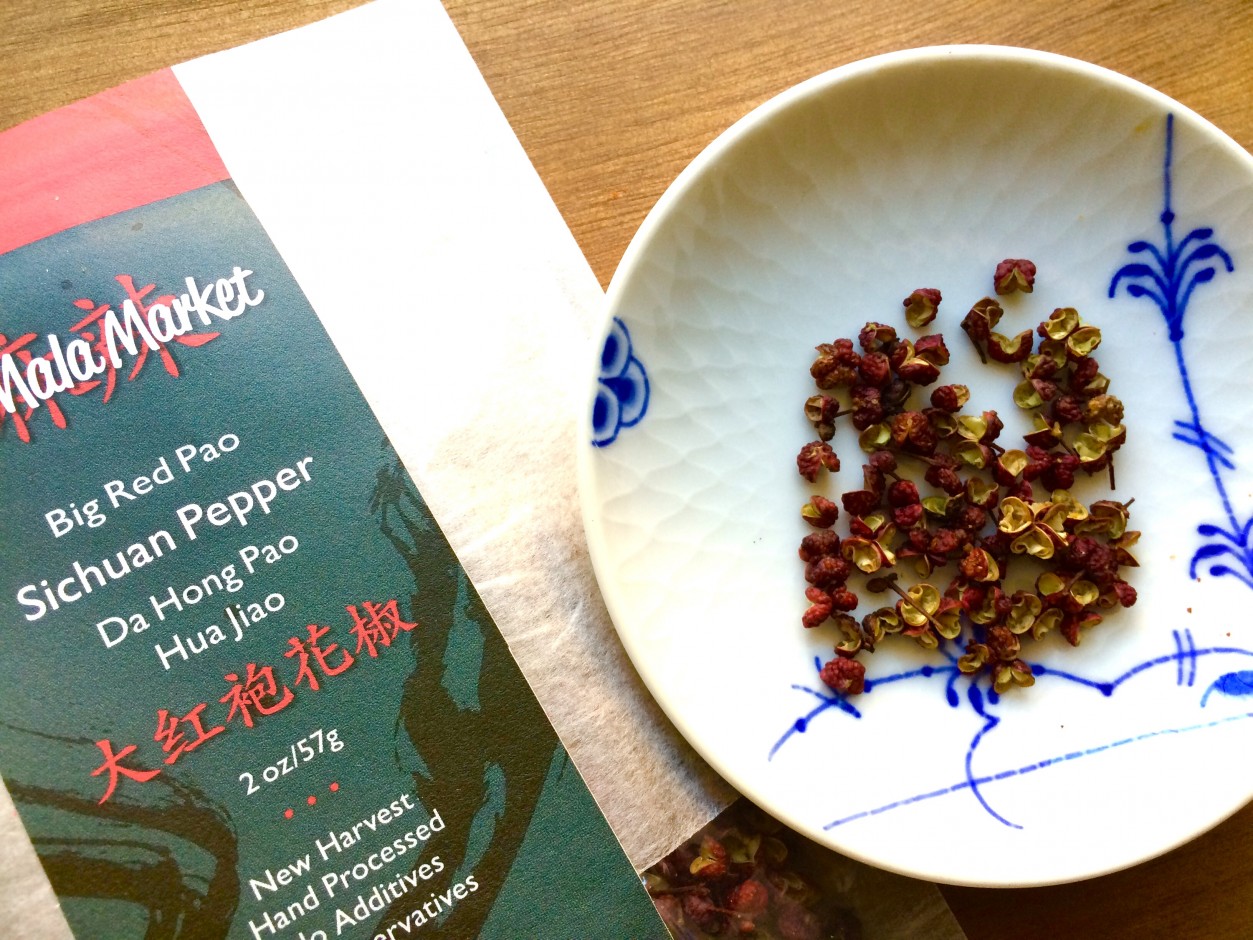 Q. You offer three different species of Sichuan peppers. Can you tell me about the distinct taste of each and what each is best for?
A. There are no hard and fast rules about which Sichuan pepper to use in which dish. It’s really a matter of preference. The da hong pao, which we’ve translated as big red pao, is what I consider the quintessential Sichuan pepper taste. Ours is grown in Gansu province and, as the name implies, is big and red and has a woodsy undertone to the citrus. Hanyuan red Sichuan pepper is grown in Hanyuan County, Sichuan, where the most famous “hua jiao” is from. It is smaller and darker than the da hong pao and has a sharper citrus tang. The green Sichuan pepper is grown in Yunnan. It is also citrusy but has a super fresh, vegetal smell and flavor. It has become very popular in Sichuan over the past couple of decades for use mainly in fish dishes but also with chicken and vegetables. The more earthy, woodsy red Sichuan pepper goes better with heavier tastes like pork and dishes with chili bean paste (doubanjiang). But when green Sichuan pepper is in season, it garnishes practically every dish in its fresh form.

Q. Besides being so fragrant and flavorful I’ve noticed I’ve hardly had to remove any twigs from your Sichuan peppers.
A All are Sichuan peppers are from the 2017 harvest, so very fresh, flavorful and numbing. The hand-sorting and cleaning is the mark of premium Sichuan pepper. The more time spent removing the twigs and seeds by hand, the higher grade the Sichuan pepper. I watched ladies going through big piles of Sichuan pepper one by one!

Q. How did you start The Mala Market?
A. We adopted Fong Chong from China when she was 11 years old, and as white parents living in the American South we struggled mightily to feed her. Chinese food was all she had ever known and, quite literally, the only thing she would eat. Food truly was the largest of many obstacles she had in adjusting to her American life, so in 2014, I doubled down on my Sichuan cooking and started a blog about learning to cook for her. I learned a lot about making the kind of food from home that she craved, but I also learned that it was hard to source some of the necessary ingredients that make it taste like it does in China if you don’t live near a large Chinese community. And even if you do, it’s hard to find super fresh and potent Sichuan pepper and chili peppers, our flavorings of choice. I also continued to travel to Sichuan frequently, as I had for many years, and when I got the opportunity to import Sichuan spices I decided to try it, with the goal of making it easier for others to source and cook with Chinese spices and sauces. By that time, Fong Chong was in high school and old enough to join me in a mother-daughter business, where she is chief taster, translator and shipping officer at The Mala Market. We have been gratified to find an enthusiastic market for the spices and other ingredients we carry and are now working to expand our product line to include other premium and exclusive Chinese products.