I’m remiss in sharing some good news. On February 7th, my video Chinese Trinidadian Chicken with Mango Chutney was nominated for an IACP (International Association of Culinary Professionals) Digital Media Award in the category of Single Food-Focused Video. I received the news on my birthday and couldn’t have asked for a nicer present. Just being nominated was a win. It’s deeply humbling to be nominated with The Mind of a Chef “Taste Memories: Ivan Orkin / Shio Ramen” and Roads and Kingdoms “One Night in Osaka.” To put things into perspective, our video at last count had about 850 views. Our fellow nominees average about 140,000 views for each of their videos.

Last June, Harrison Jeffs and I shot the video. It was the first time we worked together and it was one of the most satisfying collaborations. I’ve worked on many videos over the years. Typically there’s a production company that includes a director, producer, one or two cameramen, audio tech, makeup artist, prop stylist, and food stylist. This shoot just had Harrison handling the camera and audio and me overseeing the food and props. In the weeks after our shoot it was Harrison’s editing that pulled everything together so masterfully.

Last night the IACP award ceremony was in Louisville, KY and the impossible happened. We had our “Moonlight” moment. I still can’t believe it. I love our video but it just seemed so unlikely we could win given the formidable competition. Thank you Stephanie Browner for accepting on our behalf.

And thank you to the IACP judges for this wonderful honor. It’s too bad Harrison and I couldn’t be at the awards ceremony but thanks to Tim Jeffs we have this great montage of images. 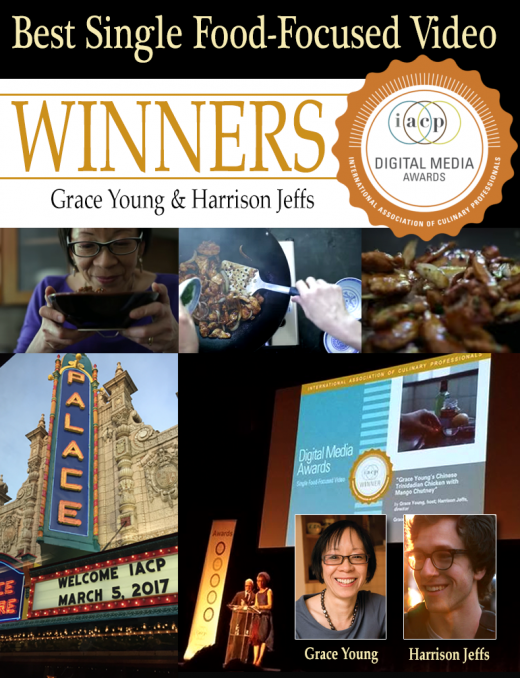