A few days ago I got some very unwelcome, very sad news from Brenda McKenney in Shanghai: Mr. Cen, the masterful wok artisan whose work I have revered for years, has closed up shop for good. Back in May, I reported on a rumor that his business had closed; mercifully, the rumor was false. But now, after just seven months, it’s truly over. I’ve been told that there’s another wok artisan in Shanghai, and one in Taipei, but for me, it’s the end of the craft. It’s the end of an era. Like me, my Wok Wednesdays followers—and thousands of others lucky enough to own Mr. Cen’s woks—are heartbroken.

In the seven months between the emergence of the false rumor and the shock of the undeniable fact, I had time to mobilize a group of amateur and professional photographers to document Mr. Cen’s work. I met these generous people through friends or on Facebook, united by our admiration of his craftsmanship. That is how I came to meet Brenda, who is a photographer living in Shanghai. I haven’t yet had time to organize all the images and videos I received, but my deep appreciation goes out to all who helped me create a record of one of the last practitioners of an ancient craft.

Mr. Cen, whose brother works alongside him in the shop, has lost his business because the entire neighborhood is being demolished for new construction. I have to admit that there is a part of me that knows that the closing is a good thing. Hand-pounding woks is a hard way to make a living. The first time I heard the distinct sound of wok hammering I wondered how it affected Mr. Cen’s hearing. It’s such a piercing, grating sound—I certainly couldn’t tolerate it for very long. How could he endure such an assault on his eardrums for all these years? What toll did endless hours of sitting on rickety, backless stools take on the craftsman’s muscles and bones as he hammered metal on metal, day after day?

Many years ago a buyer from Williams-Sonoma emailed me requesting contact information for the man who made the wok that’s on the cover of The Breath of a Wok. At first I was reluctant to share Mr. Cen’s contact information, but then I realized that the decision wasn’t mine to make. Six months later there were Cen woks on display in Williams-Sonoma stores (although the company didn’t disclose the maker’s name). At first the woks were under $100 but in the last year the price climbed as high as $149. I believe I paid about $15 for the first wok I bought from Mr. Cen in 2000, and $20 for the last one. Recently, one of my friends who went to buy a wok in Shanghai told me that Mr. Cen was well aware of Williams-Sonoma’s crazy mark-up, and that he wasn’t disturbed by an American company’s profiting so wildly from his work. He was content to have thousands of new orders to fill.

Over the years, I would tell Chinese friends in Shanghai to treat themselves to one of Mr. Cen’s woks, but they weren’t interested. In an age when modern nonstick cookware has replaced the old-fashioned carbon-steel or cast-iron wok, my suggestion fell on deaf ears. The iron wok is no longer the workhorse of the Chinese home kitchen. I guess it was a blessing that Mr. Cen had a steady wholesale customer in Williams-Sonoma. 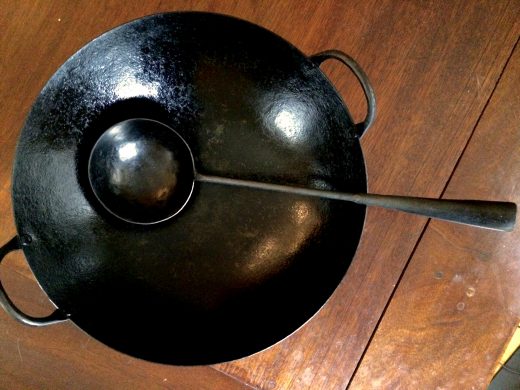 Still, I know that Mr. Cen’s creations will live on. There are thousands of them in kitchens around the world, and that’s a beautiful thing. His legacy is also preserved in The Breath of a Wok, where his story, along with Alan Richardson’s stunning photographs of the Cen brothers at work, will live forever. I will always cherish Mr. Cen’s wares—I have his Shanghainese-style wok, his pao wok, and his hand-hammered ladles. Whenever I use these timeless tools I think of Mr. Cen and my extraordinary good fortune in meeting him. There is nothing like cooking in one of these woks, each as distinctive as a Stradivarius among lesser violins. With their exquisite form and rich, dull, pebbled finish, they’re incomparable cooking vessels. There are no hot spots, because the hand-pounding creates a surface that distributes the heat evenly. The iron develops an ebony patina with use, and the wok hay or “breath of wok” flavor that the pan imparts to food is unsurpassed. The surface never flakes, as it inevitably does with factory-made carbon-steel woks. These woks are living art, culinary instruments that improve with age as you cook with them. 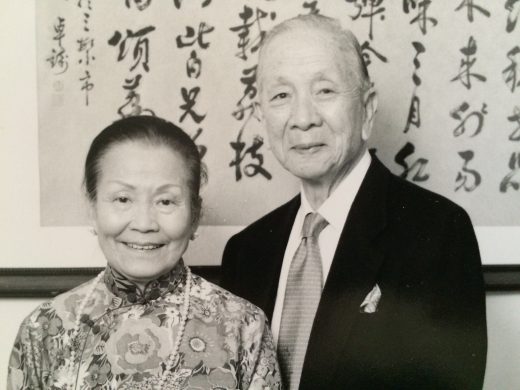 In 2000 I brought my parents to China for their last journey home. They had insisted on making the trip to Shanghai, but to my shock, we found few of their friends left to visit and nothing they wanted to see. We had hired a car and driver because Baba was elderly and having difficulty walking. When it became apparent that there was no place in particular they wanted to go, I gave my wok obsession free rein and asked the driver if he knew where I could see woks being manufactured. The driver knew of Mr. Cen, and that’s how I discovered his breathtaking workmanship. That chance meeting led to many incredible meals and memories for me and for thousands of others.

I would have loved to see the Cen brothers go on making woks forever, but eventually the business would have closed down. There was no heir to take it over had they chosen to retire, and it’s hard to think of them spending their last years still doing this tremendously taxing work. But it happened much too soon, and in a year when we have already suffered far too many losses. I will try to be content with what they have given me and always honor the memory of their craft as I use my treasured woks. If you have one of Mr. Cen’s woks, I know you will do the same. 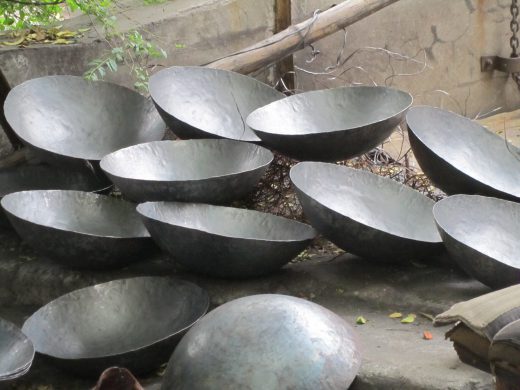 PS: One Mr. Cen wok is still available. My friend Jennifer Thomas, who visited Mr. Cen’s workshop a few years ago, is generously donating one for a Wok Wednesdays giveaway in 2017! Wok Wednesdays is an online stir-fry and wok support group founded by Matt Lardie and yours truly. Join Wok Wednesdays on Facebook to learn more about our monthly giveaways. We’re currently cooking our way through The Breath of a Wok, and I think we should now dedicate this project in honor of Mr. Cen and his brother. A Mr. Cen wok could be yours in the new year . . .