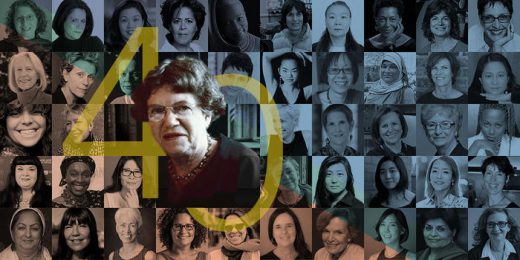 Today marks the 40th anniversary of the Margaret Mead Film Festival at the American Museum of Natural History. To shine a light on Margaret Mead’s legacy of boldness, humanity and innovation, the museum is honoring 40 women from diverse backgrounds and inviting them to take part in the celebration. Two months ago, when I received the invitation to be one of the “40 for 40,” I read and re-read the letter several times in total disbelief.

“Your gift of transporting us into other worlds and cultures through your inspiring culinary and cultural leadership leads us to make this request.”

This is the most extraordinary honor. I could never have imagined that my name or work would be connected with Margaret Mead’s. The list of honorees truly humbles me: artists, anthropologists, writers, choreographers, actors, educators, playwrights, designers, filmmakers, performers, scientists . . . from Laurie Anderson to Frances McDormand to Anna Deavere Smith, and there’s my name at the very end: Grace Young.

Tonight is Opening Night, and I’m still in a state of disbelief. The festival begins with the film “A Revolution in Four Seasons,” followed by a reception in the Hall of Gems and Minerals. With all these awe-inspiring luminaries (and the Star of India!) present, I know it will be a night to remember.

If you’re in New York, the festival runs through Oct 16th. Treat yourself to one of the many outstanding films.