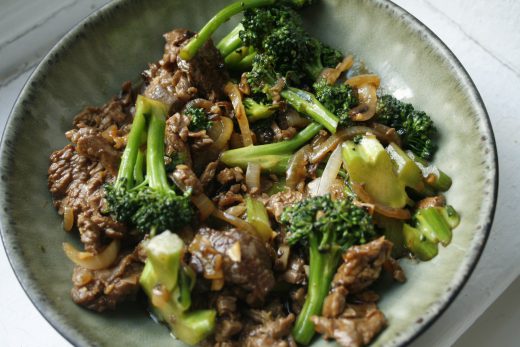 It’s a momentous day for Wok Wednesdays. After 4 1/2 years, we’ve stir-fried our way through over 100 recipes from “Stir-Frying to the Sky’s Edge.” Today is the very last recipe, Stir-Fried Beef and Broccoli.

Wok Wednesdays began with an invitation from my friend Nancie McDermott for me to come to Chapel Hill, North Carolina, to do a book talk at Flyleaf Books. One evening in the spring of 2012, I remember scanning the room at Flyleaf and feeling a little disappointed that there weren’t more people in attendance. That’s when Matt Lardie came up to me and asked if we could have our picture taken. He was holding a wok with a pale patina and told me he had bought his first wok a few weeks ago and couldn’t stop stir-frying. This sweet, handsome man changed my mood immediately. A few weeks later, I received an email from Matt asking if I remembered our meeting. He had an idea of forming an online cooking group called Wok Wednesdays. The mission would be to stir-fry our way through Sky’s Edge, cooking a recipe every other Wednesday. I was charmed that he wanted my permission. I loved the idea but had no inkling of what to expect. 10 minutes after emailing Matt my approval, he sent me the link to the Wok Wednesdays website. This guy was not fooling around.

And so we began. We had a handful of members at first. There were some Wednesdays I wondered if anyone would post anything about the recipe of the week. At first I wasn’t quite sure how I should participate. A few months after we started there were 40 or 50 members, and then, Matt decided to create a Facebook Wok Wednesdays page. That accelerated our growth and within a few months we had a few hundred members. By year two, there were a few hundred more, and as of today we are just shy of 2000 members.

Wok Wednesdays is incredible. Me, who reluctantly joined Facebook when Sky was published, am in awe of this community. I often describe it as an online wok/stir-fry support group. But it’s really so much more. It’s amazing to see my recipes posted with scrumptious looking photos and to admire each member’s unique style and interpretation of a dish. I love the prep mise en place photos with all the plates and little bowls organized next to the wok. And I’m a sucker for the photos which include a copy of “Stir-Frying to the Sky’s Edge” sitting next to the finished dish. Most members are in America, but we get the occasional post from Germany, Austria, Japan, and other faraway spots. No matter where a member is from, it’s cool to be able to interact with someone perplexed about a recipe step, an ingredient, or who feels the inevitable insecurity that comes with seasoning their first wok. Some days I can’t check in on FB as much as I want. As we’ve evolved some of the more senior members respond to the questions from the wok newbies and their answers are often exactly what I would’ve written. I love that members have absorbed all my stir-fry rules and wok propaganda. And I’m fascinated that we have members stir-frying on high powered outdoor wok burners or grills. I, who live in Manhattan, have learned about outdoor wokking from them.

On May 16, 2012 we began with the simplest stir-fry from Sky, Stir-Fried Garlic Spinach. We’ve stir-fried Kung Pao Chicken which seems to be a favorite for everyone. The diaspora stir-fries like Chinese Trinidadian Chicken with Mango Chutney were a huge hit. Members have made their own fresh rice noodles in order to stir-fry Beef Chow Fun. We’ve stir-fried Hong Kong-Style Mango Ginger Chicken, complicated recipes like Singapore-Style Stir-Fried Lobster, unusual dishes like Stir-Fried Watermelon Rind, Lomein, and so much more… Every recipe has its own story.

The word journey is overused but this has been an amazing journey. I want to thank Matt Lardie from the bottom of my heart for giving me Wok Wednesdays. It’s been a gift on so many levels. Many thanks to Karen Kerr who has volunteered countless hours to help with our administration. Thank you to all the members for your wonderful posts and for teaching me so much. And heartfelt thanks to Tane Chan, the owner of the Wok Shop who has been such a friend to our group. She has generously provided countless giveaways over the years. Every member who has had the good fortune to buy their wok in Tane’s store experiences Tane’s unique charm and expertise on woks. Her brother Randy Ong has a wealth of wok information too. The Wok Shop, in business for over 47 years in San Francisco’s Chinatown has the largest selection of woks, including my all-time favorite: an American-made carbon-steel wok that’s by far the best quality and price on the market.

One of our Wok Wednesdays members Cathy Hagin reminded me recently that the Kitchn published the Stir-Fried Beef and Broccoli recipe. On September 21 our wok adventure continues as we begin cooking from The Breath of a Wok. The next few months we’ll also have giveaways every month. So join the fun!

I often think about Wok Wednesdays and the lesson it taught me. That night at the Flyleaf, I felt badly that I hadn’t attracted a bigger crowd. Nancie McDermott put so much energy into organizing my event and as I gave my talk I remember Nancie’s smiling face, supporting me all the way. That trip was so special and it profoundly changed me. Deepest thanks to Nancie for making so many things possible. Here’s that photo of Matt and me that started everything. The exposure and focus are terrible but it doesn’t matter. Sometimes great things happen when life is out of focus. 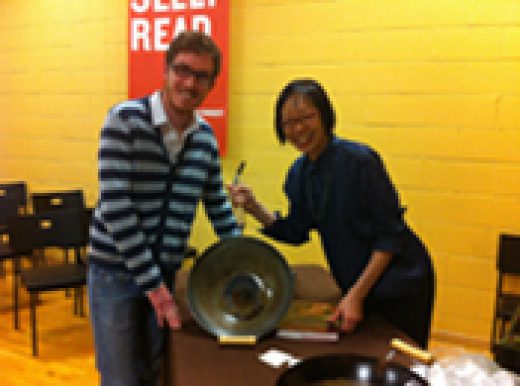