Mr. Cen, the Shanghainese wok artisan whose incredible hand-hammered woks grace the cover of “The Breath of a Wok” is slipping from me. For years I have dreaded this fate. Since 2004, I have sent friends and fans of my books to visit Mr. Cen in Shanghai. Inevitably, the experience would be the highlight of their China trips. Everyone brought home woks and gushed with stories of how extraordinary it was to witness Mr. Cen and his brother fashioning beautiful woks in their primitive little shop. Sometimes a few years passed between visits. With news of each encounter I was elated, for I always worried that Mr. Cen might have closed shop or moved away.

A few months ago I received an email from a Mr. Burgess who had found a photo of me in The New York Times holding one of Mr. Cen’s woks. Mr. Burgess wanted to know where could he find such a wok. I wrote back that the northern-style or pao wok in the picture was made by Mr. Cen Lian Gen and that the only way to procure one was via a trip to Shanghai. Mr. Burgess replied that a friend would be in Shanghai. Then, a few weeks ago, I received his email along with this devastating photo: “No luck on the wok hunt. That neighborhood was recently torn down. Old China is disappearing fast. We found only a few old people staying put in the middle of the demolition.” 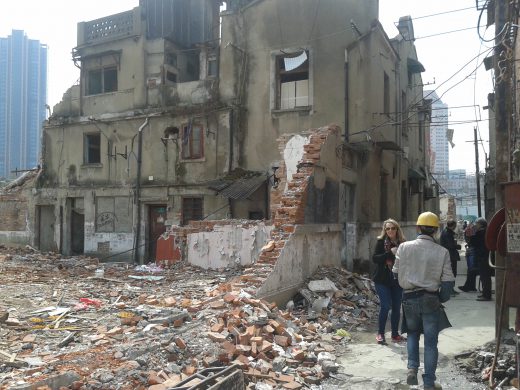 I immediately contacted my friend Jennifer Thomas who I had sent to meet Mr. Cen a few years ago. She had bought a large shipment of woks and had kindly sold them at cost to members of Wok Wednesdays. I knew she had Mr. Cen’s phone number. She reported back that for days she’d called the two numbers she has: one was disconnected and the other just rang. Then she wrote me that she found a blog post on chowhound regarding Mr. Cen. It reported that as of May 2016, Mr. Cen and his brother are still in the neighborhood making woks, but because of the city redevelopment plans, they expect a neighborhood relocation as early as June. Jennifer reminded me that Mr. Cen’s “shop” is hard to find in the best of circumstances. We surmised that with the demolition, Mr. Burgess’s friend must’ve gotten lost.

I first discovered Mr. Cen and his brother in 2000. I had taken my elderly parents back to Shanghai for what was to be their last trip to China. Since my father was 86-years old and no longer able to walk distances, we hired a driver to take us around the city. Late one afternoon, I asked the driver if he knew of a place where I could see woks being manufactured. He nodded his head and we headed to the Zhabei District. When we arrived, I got out of the car and followed the driver down a residential street, hearing a distinct pounding sound, loud and piercing. By the time we reached Mr. Cen’s outdoor work yard and saw the two Cen brothers making woks, I was in total disbelief. It had never occurred to me that anyone still made woks by hand. There we were, my parents and I, in modern Shanghai, yet it was as though we had completely stepped back in time. Mr Cen sat on a backless wooden stool in a concrete courtyard strewn with tools and metal. We watched as he took a disc of carbon-steel and then alternated between heating and hammering the hot metal until it was a perfect, useful, beautiful artifact. The woks he produced were also like nothing I’d ever seen before. Not sleek or shiny or perfectly manufactured. They had dull, pebbled finishes and their crafting was exquisite.

Mr. Cen explained to me the hand-hammering changes the structure of the metal, giving it greater strength and durability than a factory made one. Each wok requires at least five hours to produce, and he makes 100 woks in a month.

Two years later I traveled with Alan Richardson, my collaborator for “The Breath of a Wok,” to Shanghai just to photograph Mr. Cen. I was anxious if we’d find him, but the moment we emerged from the car, I was relieved to hear the same distinct, piercing sound of metal being pounded. That interview with Mr. Cen was the highlight of my research for “Breath,” a cookbook that is an ode to the wok as a way of life in China. I understood that I was witness to the crafting of a dying art form, one kept alive by two men who had learned their craft from their deceased father who started the business 70 years before. After an hour of watching them work my ears began to ring from the constant pounding of metal. That’s when I noticed the Cen brothers had little balls of cotton in their ears to diminish the sound. I was skeptical of how effective those balls of cotton were. The work conditions of their operation were primitive at best. 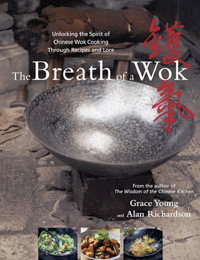 Shortly after “The Breath of a Wok” was published my friend Mary Johnson flew to Shanghai and I had her bring Mr. Cen a copy of the book. I never heard from Mr. Cen but in 2009, I read a CNN story about Mr. Cen which mentions: “Cen goes into his one-room workshop to pull out a book, in English, featuring Chinese woks and wok-style cooking. He can’t read it, but he fingers the glossy pages, turning to a photograph of his woks stacked in an iron tower.”

My friend Tom who visited Mr. Cen in Shanghai in 2014, was so inspired by the visit that he learned to stir-fry. “The act of taking Mr. Cen’s wok off the hanging rack is about as close to a religious experience as I get. It’s such a beautiful, useful tool. After stir-frying “the ‘ceremony’ of cleaning, drying and hanging the wok back up always feels to me like a small nod of thanks for his fine craftsmanship.”

My own Mr. Cen Cantonese-style wok, which is now 16-years old is a black beauty after years of stir-frying. Every time I use the wok I pause to admire it. Not only is it stunning but it has the right heft and it feels so good to run my hands around its belly. It’s such a pleasure to cook with the wok. The nonstick surface is like that of no other pan. I can fry an egg with a mere 1/4 teaspoon of oil and the egg slips and slides in the wok. But the best thing is to stir-fry because the wok truly imparts wok fragrance and flavor or the “breath of a wok” that makes a stir-fry so deliriously sublime.

My friend Bob Williams who bought several Mr. Cen woks wrote me, “I believe my woks are actually Mr. Cen’s woks, and they are only on loan to me.” I understand Bob’s sentiment. Unlike a factory-made wok, Mr Cen’s pans are infused with his spirit and life force. To cook with them is truly a privilege.

I hold the hope that Mr. Cen will relocate his business. Still, my heart is heavy with thoughts that the time has come to accept that Mr. Cen may be finally closing shop. I’ve been blessed to meet such an artist and to cook with his masterpieces. Betty Fussell the food historian wrote, “the wok symbolizes a craft, an art, a container of communal harmony and balance.” Mr. Cen’s woks are all that and more… Last night in honor of Mr. Cen, I stir-fried spring asparagus. The crisp stalks sparkled against the wok’s ebony finish. Over dinner my husband and I savored the pleasure of his artistry in every delicious bite.