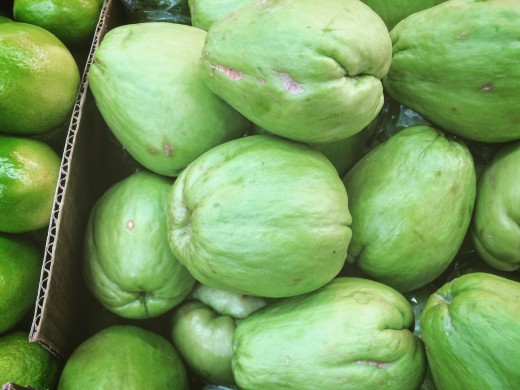 Next week’s Wok Wednesdays recipe is Chinese Jamaican Stir-Fried Chicken with Chayote. I was in Chinatown this morning and was pleased to find a gorgeous selection. Even my local Morton’s supermarket was well stocked. Chayote is also known as mirliton, mango squash, vegetable pear, Buddha’s hand and Buddha’s hand melon. It’s a popular vegetable in the Philippines, Thailand, Indonesia, India, China, Australia, Jamaica, and throughout South America. The flavor is mild like zucchini or fuzzy melon.

When selecting chayote look for unblemished, firm melons. Chayote must be peeled as the skin doesn’t soften with cooking. Some cooks wear a latex glove when handling chayote as the flesh can leave a slightly sticky residue on your hands. The melon has a pear shape and after peeling should be sliced horizontally in half. Most of the time you’ll find a flat, pale seed that should be discarded. The Chinese like to simmer chayote in soups but my favorite way of cooking it is to braise or stir-fry it.

While researching Stir-Frying to the Sky’s Edge I was lucky to meet Rose Wong, who grew up in Jamaica. Here’s Rose showing off her delicious Chinese Jamaican Stir-Fried Chicken with Chayote.  I’m not posting the recipe as it can be found in my cookbook Stir-Frying to the Sky’s Edge, page 133. Growing up in the 1950s, Rose and her girlfriends like to stir-fry because it was fast cooking. The combination of Chinese foods with Jamaican flavors was fashionable, and a popular ingredients was Pickapeppa, a local sauce known as Jamaican ketchup. Check out Wok Wednesdays Facebook page starting April 6th, when everyone will be posting Chinese Jamaican Stir-Fried Chicken with Chayote. In the meanwhile, if you’ve never tried chayote look for it in your produce market. 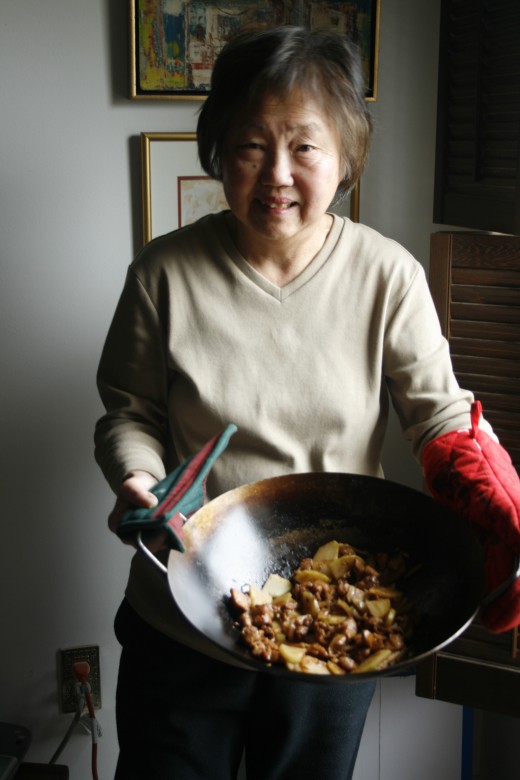