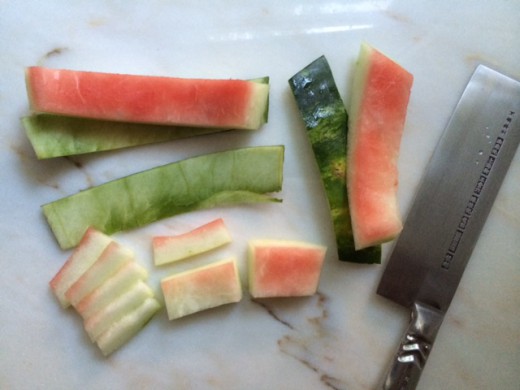 I hate wasting food. Like a good Chinese daughter I eat every grain of rice and I never toss leftovers. But when I discovered cooks in China stir-fry watermelon, even I was surprised. In researching “Stir-Frying to the Sky’s Edge” I interviewed home cook Beverly Low to get her famous recipe for stir-fried fuzzy melon with ginger pork. (Here’s a photo of the fuzzy melon) Just as the interview was ending she said in passing that in the summertime, her relatives in China used watermelon rind in place of fuzzy melon. What??!?!? The idea of cooking watermelon rind sounded so bizarre. Low, matter-of-factly explained that she was pretty sure it was because her family didn’t want to waste food. In “The Breath of a Wok” I interviewed Dr. Kam Toa Miu, who told me living in China in the 1950s, there were numerous food shortages and sometimes they were “lucky to eat four ounces of rice each day.” I closed my notebook and decided to try stir-frying watermelon rind.

To do so, I cut off the tough green rind and then sliced the white flesh tinged with a little of the pink fruit into 1/4-inch thick slices and followed the recipe for Beverly’s stir-fried fuzzy melon. I also added slices of fuzzy melon so that I could taste the two melons side by side and to my amazement they were almost identical except the watermelon was much more beautiful tinged with the blush of pink.

This week’s Wok Wednesdays recipe is Beverly’s recipe with the watermelon variation. The watermelon has been exceptionally good this summer. The only problem is that these days watermelon is bred to have the thinnest rind so when you buy the fruit for the stir-fry make sure there’s at least 1/2-inch of rind. It’s a nice feeling after enjoying the fruit to know that you can make a wonderful meal with the rind. And in a world where so many are starving, wasting food makes no sense.