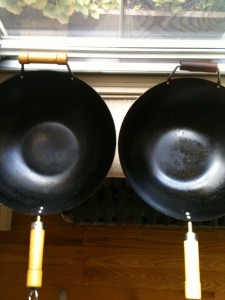 Apologies to all for neglecting to post anything for so long. I’m so bad for not even writing a Happy New Year entry. It’s just that I needed a break from writing. Since April of 2010 I have traveled with my wok on book tour three times to San Francisco, twice to Portland, twice to Chicago, Seattle, Olympia, Los Angeles, Philadelphia, Washington D. C., Dallas, Houston, Austin, Lake Austin, Manila, and Hong Kong.

My two woks tell my story best. The one to the left is a 10 year old well-seasoned wok and the other was new when I set off on book tour. It normally takes two years of regular use to reach the ebony patina of the older wok but my 7 months of intense travel aged my wok quickly. Don’t get me wrong. It’s been an amazing journey. I’ve met the most extraordinary new friends and reconnected with old friends. And in the last month I should’ve been posting regularly as every day seemed to give me a new present. “Stir-Frying to the Sky’s Edge was named as one of the best cookbooks of 2010 by NPR , Good Morning America (I loved hearing George Stephanopoulos talking about my book with Sara Moulton!), The Washington Post, Huffington Post, Boston Globe, WBUR, The Montreal Post Gazette, Minneapolis Tribune, Press Democrat, and Newsday. The book also won this year’s Gourmand World Cookbook Award for “Best Chinese Cuisine Book” published in the U.S..  I was also extremely honored that the Boston Globe gave the book a stellar review adding to my gratitude as the year closed.

2011 began with chowhound naming “Stir-Frying to the Sky’s Edge” and “The Breath of a Wok” as joint Cookbook of the Month. I’m thrilled folks are seasoning new carbon-steel woks and stir-frying up a storm. I will jump into that discussion in the next few days. For now I just wanted to wish everyone belated blessings for 2011. But New Years doesn’t become real for me until the lunar year commences which will be February 3, Year of the Rabbit. So maybe I’m not late after all. It’s time to clean the house and to set my life in order (yeah right) in time for the Kitchen God’s yearly report for New Years. Who knows if I’ll get to housekeeping but at least I finally wrote a post.